Why do Spiders Decorate their Webs?

By
Nicky Bay
on
Following the previous post about the Spider Temple post with the Neogea Nocticolor Spider decorating it’s web with 3 egg sacs, this post will be about the possible reasons for doing so.

Here’s an example of a juvenile Argiope, spinning an extra layer of silk where it rests. 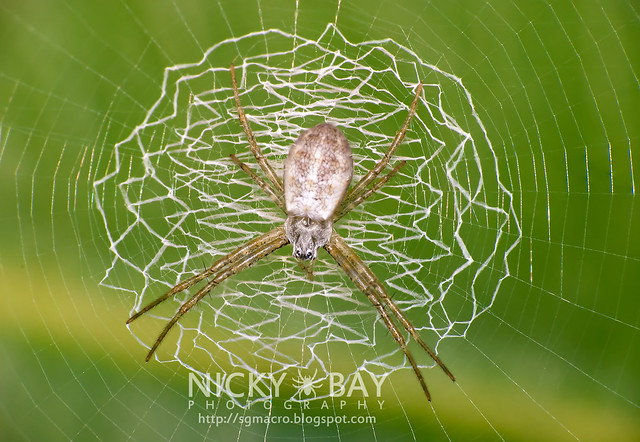 Many spiders could have just spun simple webs, yet many go the extra mile to spin elaborate patterns or the extra tufts of silk like this, also known as stabilimentum. Many have discussed this before, but I’ll just list the possible reasons from the most probable, to those suggested in jest. They are theories, who knows which would be really true?

1) To attract more prey
Some research had shown that spiders with the elaborate web designs attracted more prey to their web.

Some said that the extra web reflects UV light (just like our mosquitoe killers with UV) and attracts more prey.

Some spiders tend to dangle their half eaten prey on their web as well, it might just attract more over!

2) To attract mates
Just like a peacock strutting it’s feathers, a spider with a more majestic web may have a better chance of attracting mates

3) Prominence to avoid accidental destruction by larger animals
If the web was more prominent like this, you wouldn’t be as likely to walk into it, right? Same goes for birds and other creatures.

For some species like the St Andrews Cross Spider, the web patterns extends the legs like a huge cross, making it look more menacing and less likely a prey for other predators.

4) To stabalize the web
Extra structures do make it more stable, no? Perhaps thats why it’s called.. stabilimentum? The rain can be quite heavy in Singapore, not sure if it can destroy webs though.

5) Produced extra silk
Maybe the spiders just produced too much silk, and conveniently spun them around the center where it stands?

8) Tough waiting for prey, might as well make a nice comfortable web/home!
Haven’t you sought after a comfortable bed before? Or decorated your own room?

Welcome suggestions to any other reasons for this.
TAGS
< PREVIOUS POST