Why do Scorpions Glow Under UV light?

By
Nicky Bay
on
Many macro shooters have come to know that the scorpion’s exoskeleton glows a bright cyan under Ultra Violet (UV) light. But few know why or how.

Why the need to glow?
After scouring around for answers, the most commonly accepted answer was… that the scorpion’s cuticle or exoskeleton functions as a giant secondary eye, collecting light information and relaying it to the nervous system. It is believed to be used by the scorpions to detect shelter, as being under shelter would block the light signals on it’s body. Douglas Gaffin of the University of Oklahoma “blindfolded” the scorpions and found that they could still detect light. See link here.

There is another theory that the nocturnal scorpions have properties in it’s exoskeleton that repels UV light, protecting it from the sun. Scorpions normally hunt at night and are tuned for the light and temperature conditions. If it requires to move in the day for any reason, this might help to re-radiate solar energy from the sun.

How did it glow?
As for HOW the glow came about, further scouring found that the mature exoskeleton accumulates a chemical called beta-carboline, which glows under UV.

Update 20 Nov 2013: My UV photos were recently published on WIRED, with more details on this phenomenon: The Secret World of Fluorescent Arthropods. 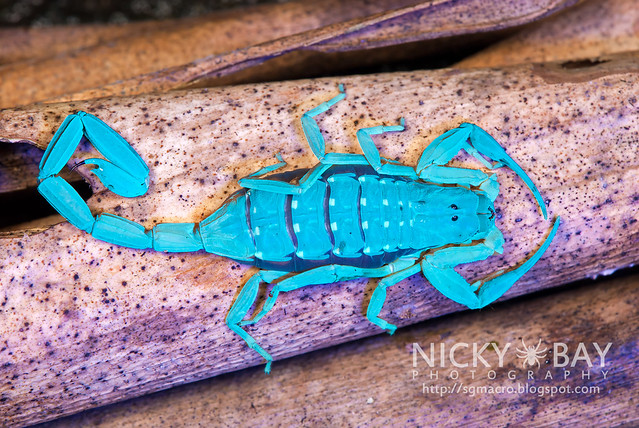 #1 Had everyone practising UV shots with my UV torch, this shot used flash to fill the background. This Lychas scutilus is quite commonly found in Singapore. 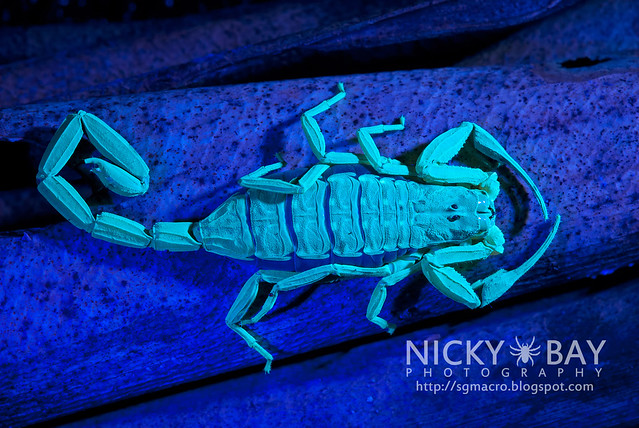 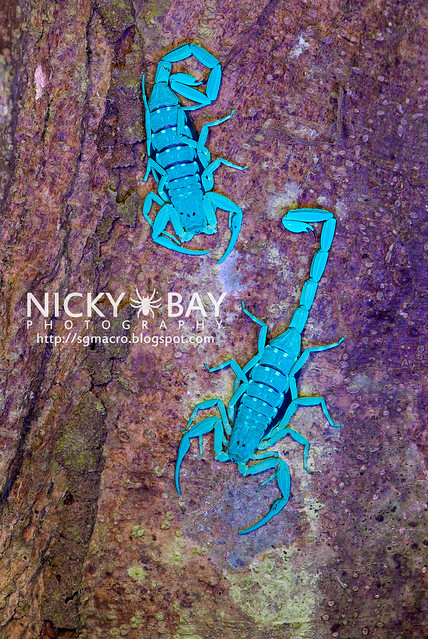 #3 A pair of scorpions on the tree bark, again with fill flash 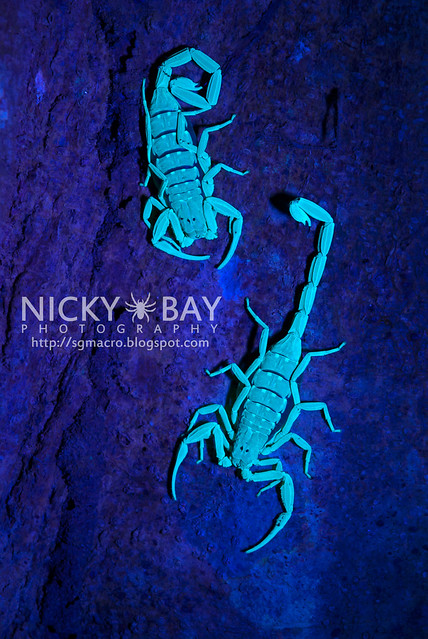 #4 The same pair lighted with only UV light. 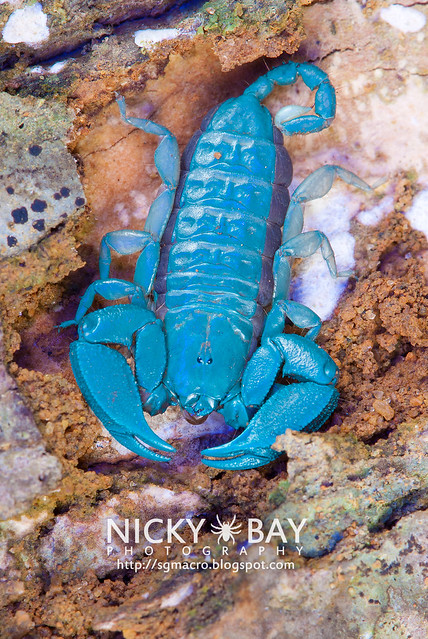 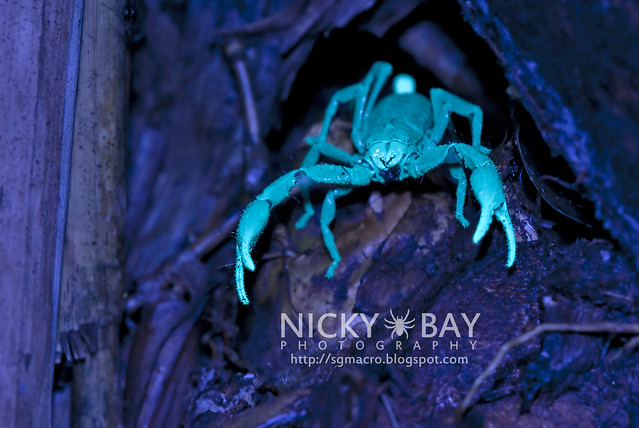 #6 Even the black forest scorpion glows. Without the UV light, it would appear completely black. 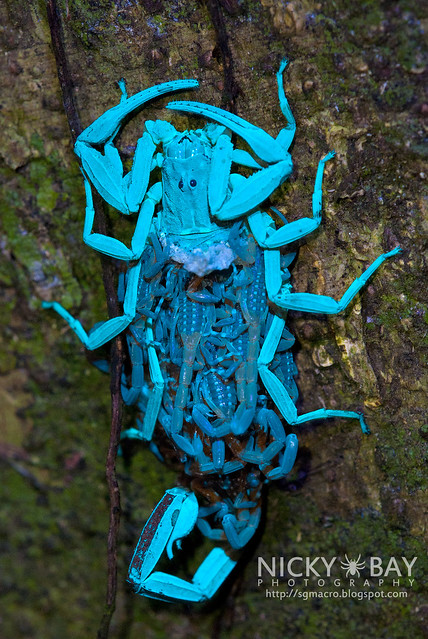 #7 A mother with babies on her back. As mentioned earlier, the chemical causing the glow accumulates on mature exoskeletons. That’s probably why the babies do not glow. 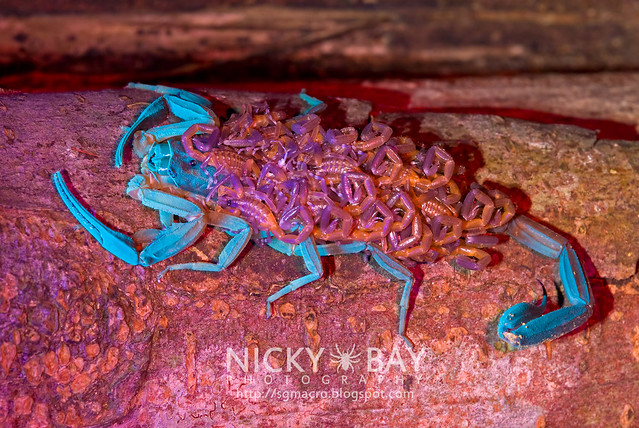 #8 Another old picture of a scorpion with babies. The scene was lighted with a red light, showing again that the babies do not glow under UV light.

Some other simple finds at Nangka Trail… 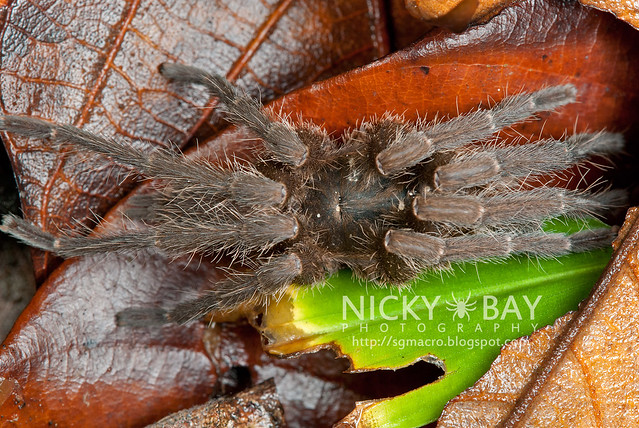 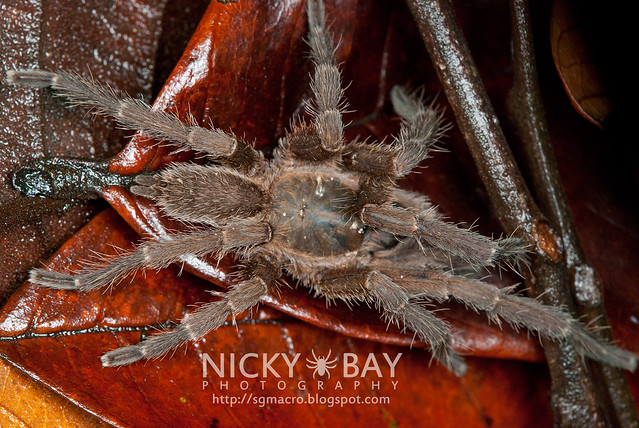 #10 It ran off in hiding after this shot 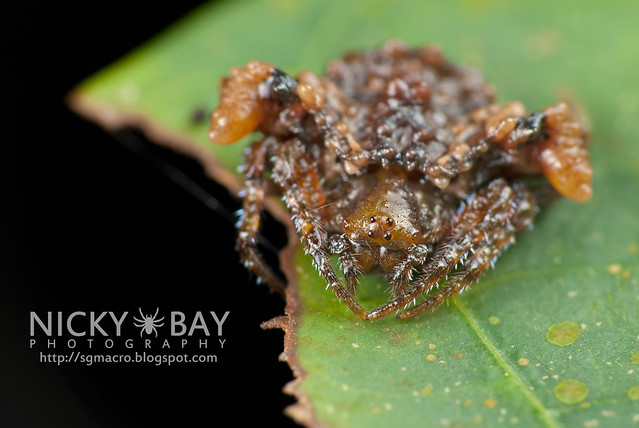 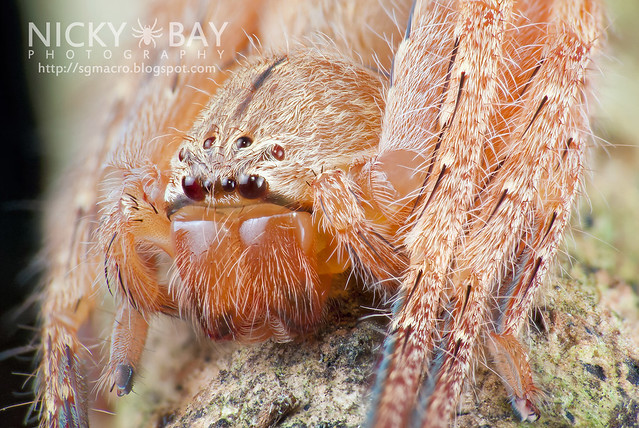 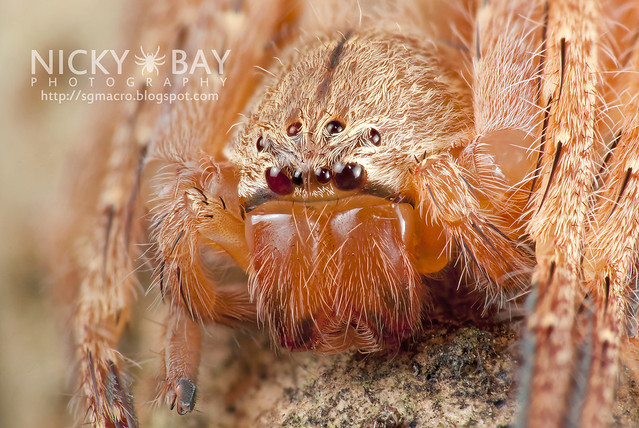 #13 Closer view of the face 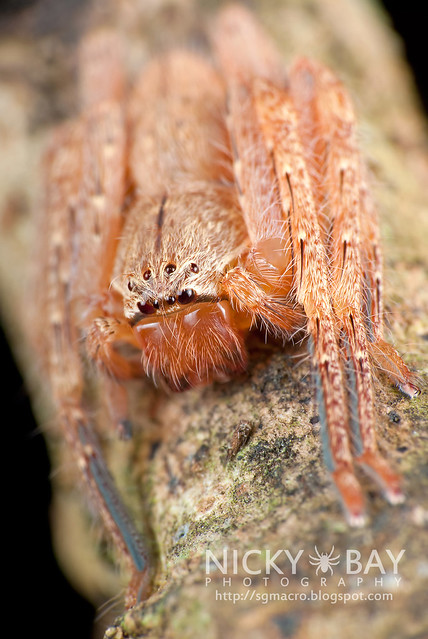 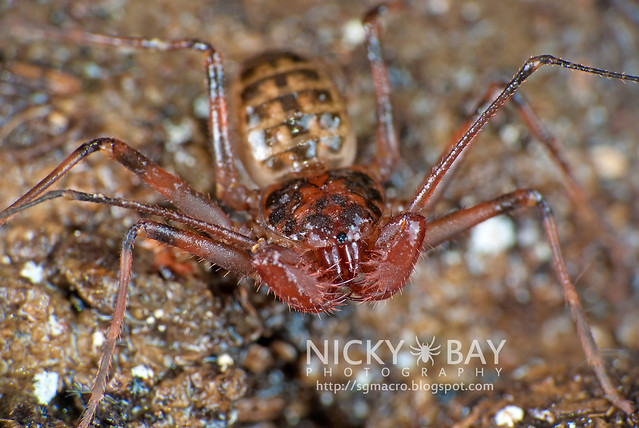 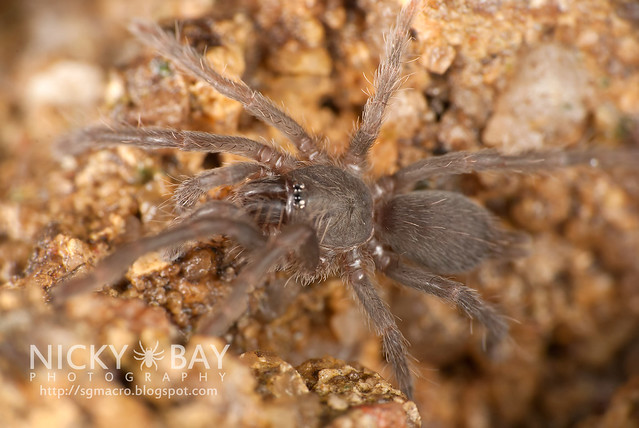 #16 A baby Tarantula (Phlogiellus sp. running around on a rock. 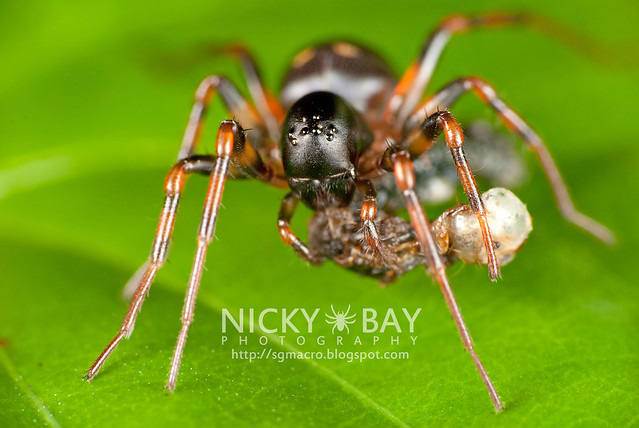 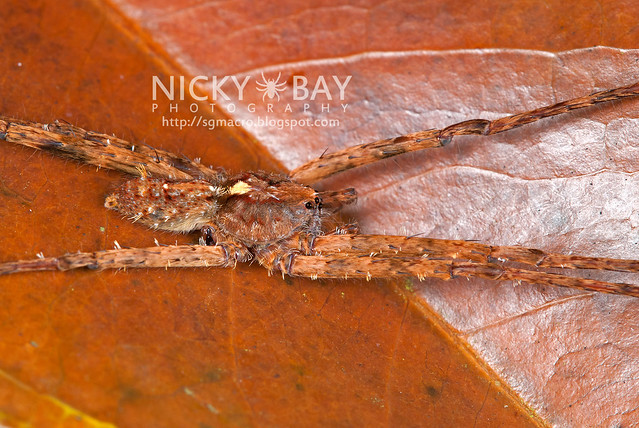 #18 Appears to be a pisaurid, but check out the eye arrangement (below) and it should be a ctenid, likely to be from the genus Acantheis. 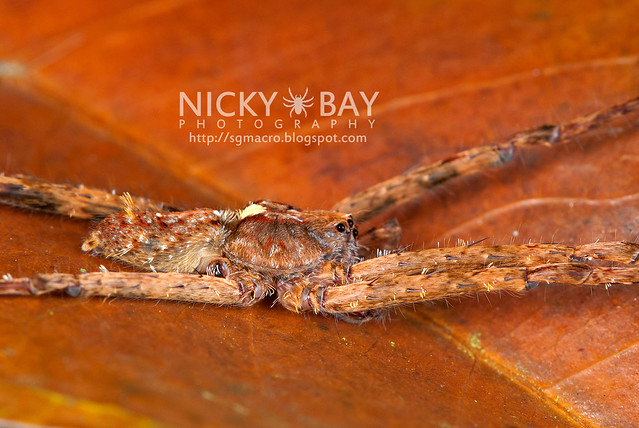 #19 View from a lower angle 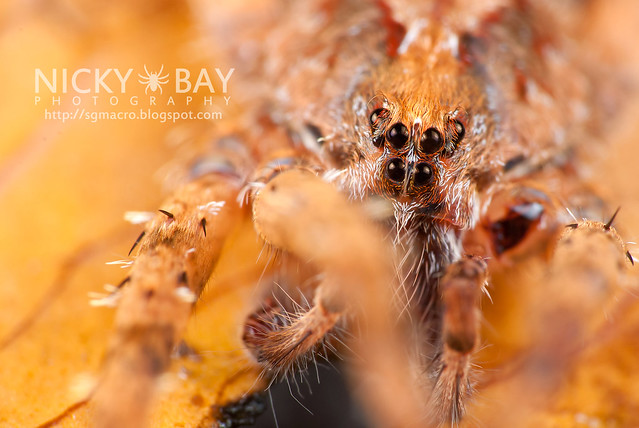 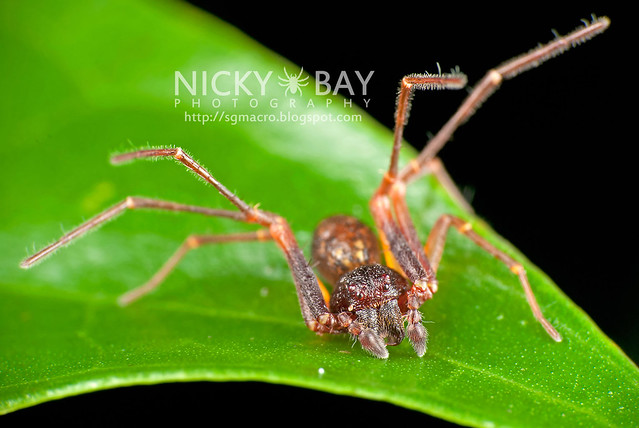 James blogged about this trip here.

Bringing Folks from Malaysia on a Mantidfly Hunt