Return of the Eight-Spotted Crab Spider

By
Nicky Bay
on
The Eight-Spotted Crab Spider (Platythomisus octomaculatus) has been an elusive subject to many macro photographers, appearing in the Singapore macro scene a small handful of times per year, despite being possibly the largest of all Crab Spiders (Thomisidae) in Singapore.

It was thanks to Victor and David who found this rare little spider and alerted a few of us who rushed over to take a few shots. (ok ok.. more than a few shots) 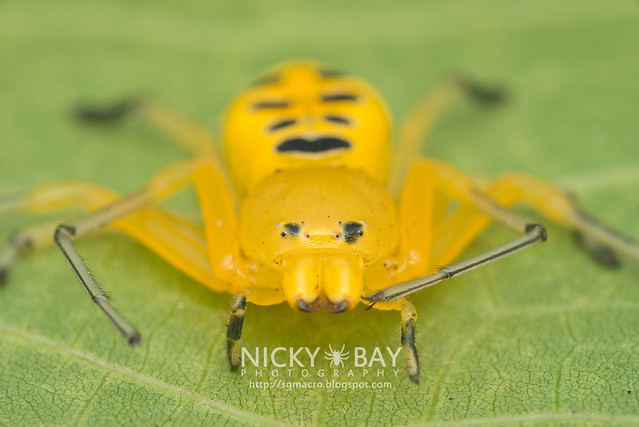 #1 Probably a juvenile but nearing adulthood. The “panda eyes” were barely visible and slightly faded. 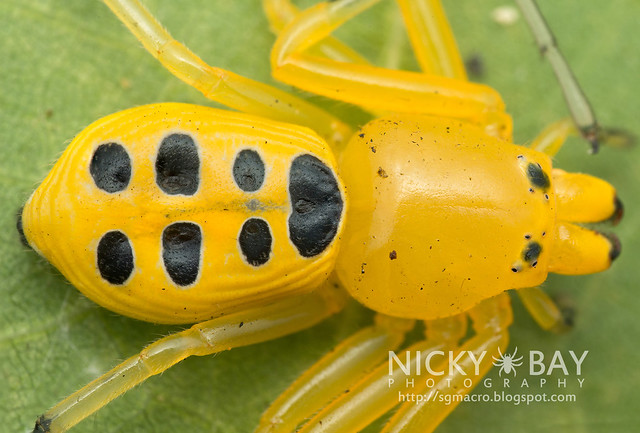 #2 Many have questioned why this is called the Eight-Spotted Crab Spider but only see 7 spots on the abdomen. Where did the 8th spot go? Did they kind of merge to form a larger spot nearer to the carapace? 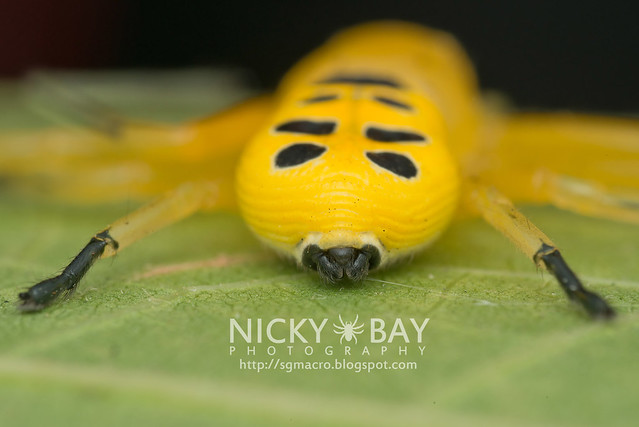 #3 Rear view of the spinnerets. Could this be.. the 8th spot? It is said that the 8th spot is hidden underneath. I did not get to shoot the underside of this spider, forgot to bring a piece of glass for this, but come to think of it, it is possible to shoot the spider from behind a normal UV filter! 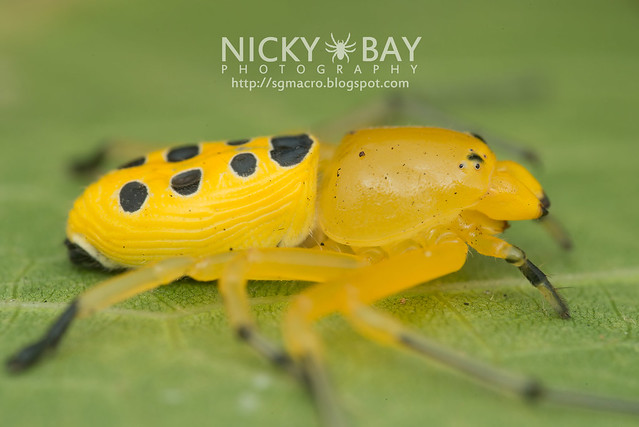 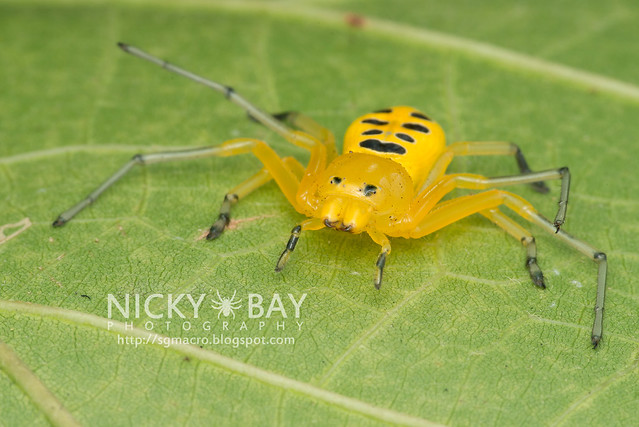 #5 Defensive stance, raising it’s forelegs up at me 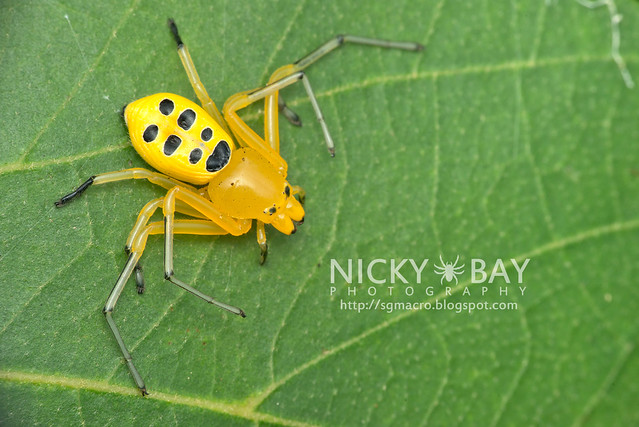 #6 Full dorsal view (top). The last 3 segments of each leg (Tarsus, Metatarsus and Tibia) are slightly transparent, typical of juveniles. 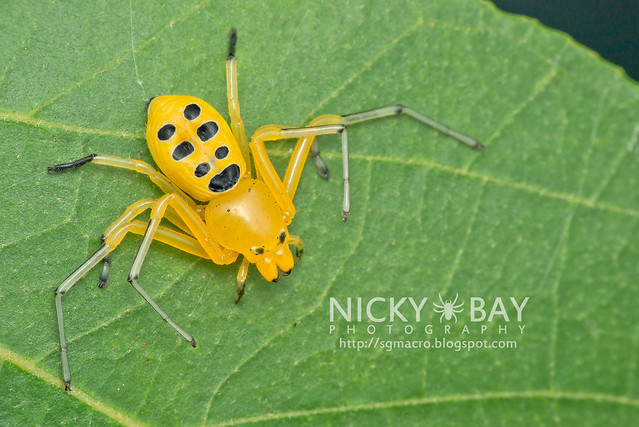 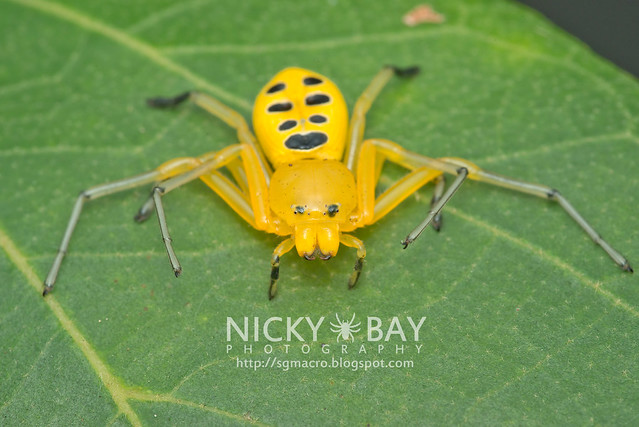 #8 Fore legs occasionally reach the mouth parts for some cleaning 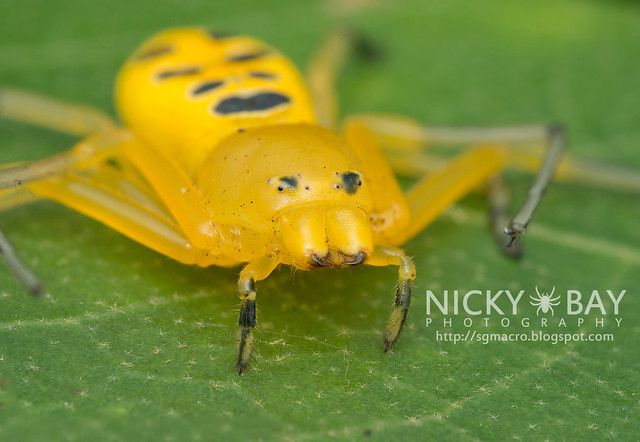 #9 Another view of the faded “panda eyes”. The full adult would have solid black “panda eyes” 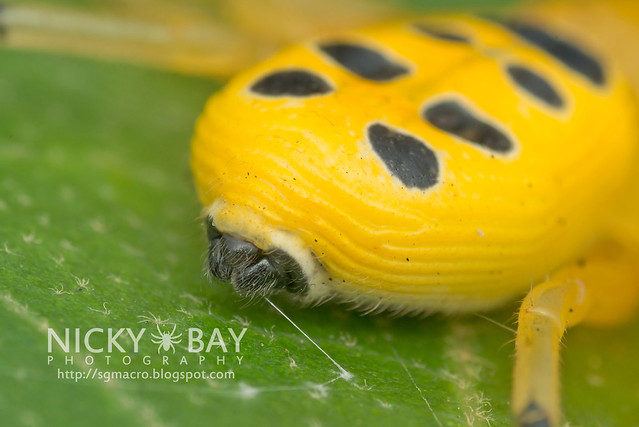 #10 Closer view of the spinnerets 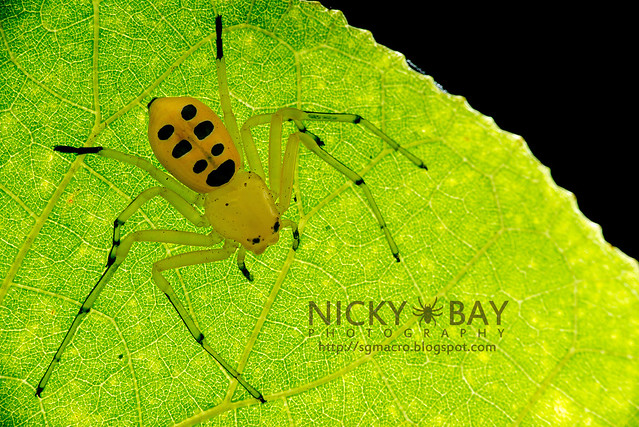 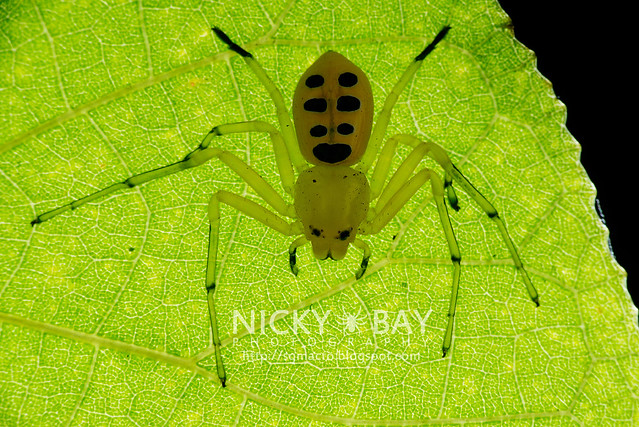 #12 Another view with less fill light 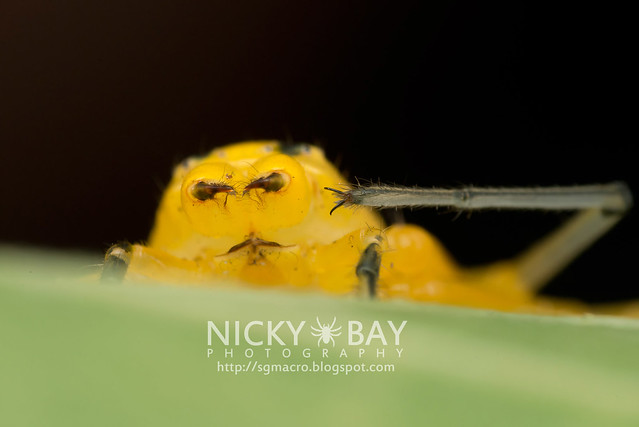 #13 Peekaboo view of the fangs 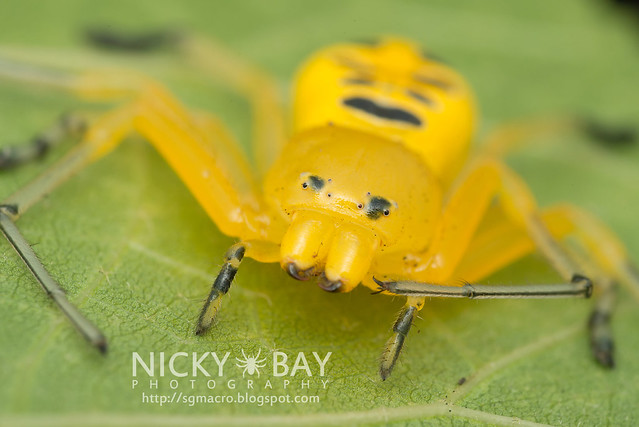 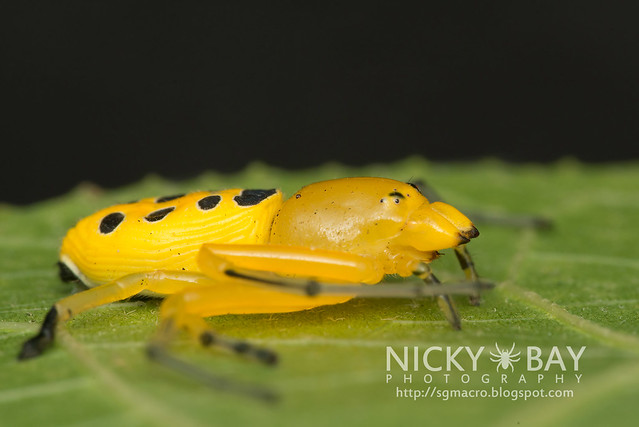 #15 Just in case, got another lateral shot 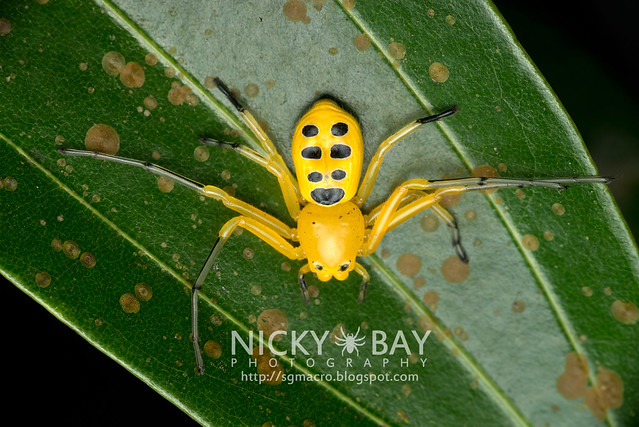 #16 This was the original leaf that it was located on. 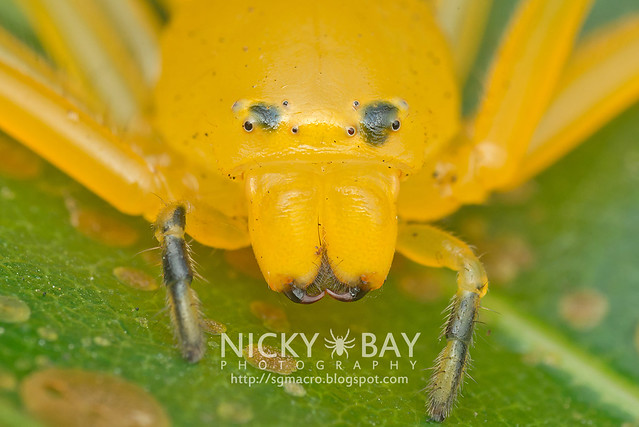 #17 Face shot. Slightly higher angle to get the chelicerae in focus 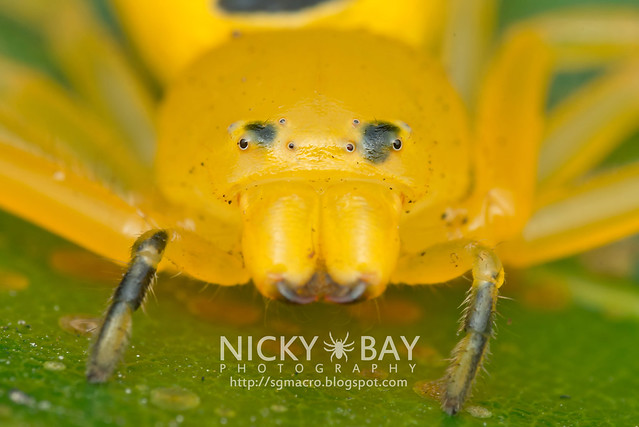 #18 With a full frontal shot, the chelicerae would be out of focus

While waiting to shoot the yellow gem, took some random shots of subjects around the area. 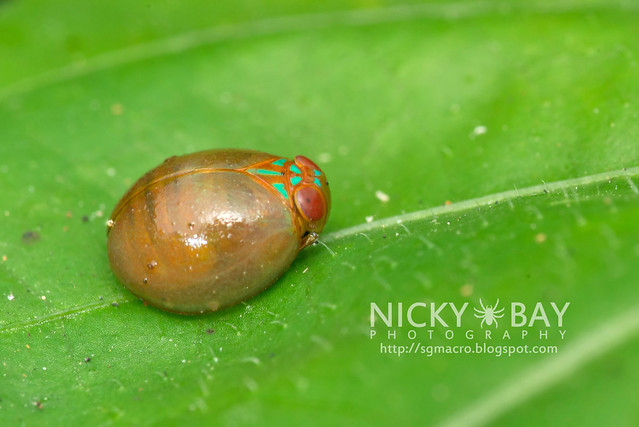 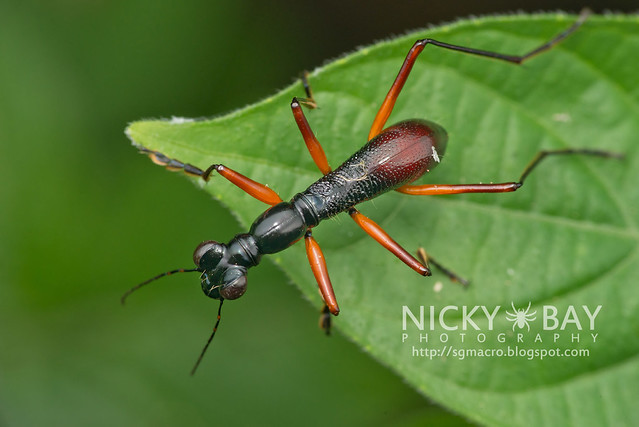 #20 Flightless Tiger Beetle (Tricondyla sp.) I had a full post on a Katydid mimicking this particular Tiger Beetle. 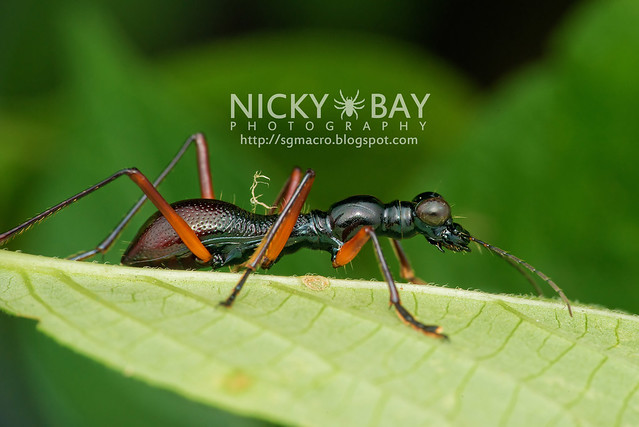 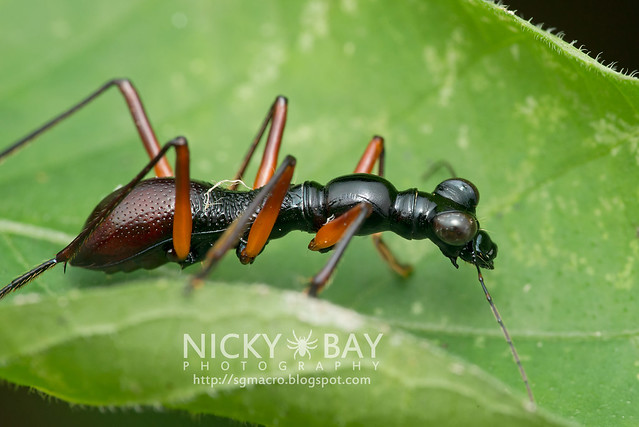 #22 It was walking around non-stop, so I just took more random angles 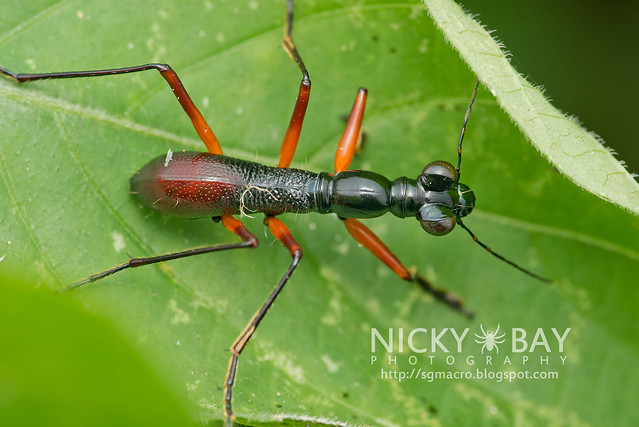 The full album can be viewed here.
TAGS
< PREVIOUS POST

A Viper Near You.. and Sexual Dichromatism